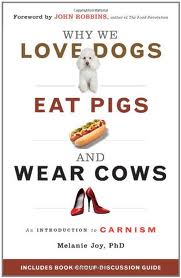 I spent several hours this weekend reading through the comments section of the NYTimes ‘Tell Us Why It’s Ethical to Eat Meat” contest and getting progressively depressed by the tendency of ‘meat-eaters’ to dismiss vegans as elitist, irrational, extreme or simple wrong and to justify their meat consumption in a variety of predictable arguments–some more absurd than others. See this ‘Defensive Omnivore Bingo‘ for typical responses to veganism and then compare this to the comments section of the contest (they’re all there). I remember making these same arguments when I was an enthusiastic meat-eater not so long ago. It’s funny, when you’ve been vegan for a while, you start to realize you’ve heard all the arguments and all the justifications for eating meat. They are all some variation of one of the same set of reasons. And what’s particularly funny is that most meat-eaters who are making the justifications act like they’re the first to ever make this argument. In the three years I’ve been vegan, I’ve gotten to the point where within a couple of moments I can recognize which justification it is… It’s the “It’s natural” line, or the “What about plants?” line, or the “God put animals on the planet to eat” line, or “It’s tradition” or “I like the way it tastes and I have the right to choose what I eat” or “I only eat ‘humanely slaughtered’ meat”. The list goes on, but ultimately all arguments boil down to one of the set. The downside to this predictability of justifications is that it gets old having to listen to the same tired old justifications (none of which are particularly convincing). The upside to this predictability of justifications is that you’ll have no shortage of practice for responding to these arguments and honing your counter-arguments. You can try out different strategies and see which are most effective in furthering the conversation.

As I was struggling with my own reactions to reading the hundreds of comments justifying meat consumption (none of which actually addressed the issue of ethics), I found myself thinking about ‘carnism’. During my Animals, Ethics and Food class this past quarter, I had us read a couple of chapters from Melanie Joy’s Why We Love Dogs, Eat Pigs and Wear Cows. The most poignant contribution of this book, in my opinion, is the introduction of the term ‘carnism’ or ‘carnist’ to describe someone who chooses to eat meat. Joy (pp 29-30) explains carnism in the following way:

Currently, we use the term ‘meat eater’ to describe anyone who is not vegetarian. But how accurate is this? As we established, a vegetarian is not simply a ‘plant eater’. Eating plants is a behavior that stems from a belief system. ‘Vegetarian’ accurately reflects that a core belief system is at work: the suffix ‘arian’ denotes a person who advocates, supports or practices a doctrine or set of principles.

In contrast, the term ‘meat eater’ isolates the practice of consuming meat, as though it were divorced from a person’s beliefs and values. It implies that the person who eats meat is acting outside of a belief system. But is eating meat truly a behavior that exists independent of a belief system?

We don’t see meat eating as we do vegetarianism–as a choice, based on a set of assumptions about animals, our world, and ourselves. Rather, we see it as a given, the ‘natural’ thing to do, the way things have always been and the way things will always be. We eat animals without thinking about what we are doing and why because the belief system that underlies this behavior is invisible. This invisible belief system is what I call carnism…

Carnism is the belief system in which eating certain animals is considered ethical and appropriate. Carnists–people who eat meat–are not the same as carnivores. Carnivores are animals that are dependent on meat to survive. Carnists are not merely omnivores. An omnivore is an animal–human or nonhuman–that has the physiological ability to ingest both plants and meat. But, like ‘carnivore,’ ‘omnivore’ is a term that describes one’s biological constitution, not one’s philosophical choice. Carnists eat meat not because they need to, but because they choose to, and choices always stem from beliefs.”

I’ve read a few critiques of NYTimes contest by the vegan community and I have been thinking about the contest and its value (or not) over the past few days. It seems to me this contest may be an opportunity to reflect on carnism as the status quo in the sense that it’s asking people to come up with ethical defenses for what has, for so long, just been viewed as the way things are. We so infrequently challenge what we take to be fundamental norms. But I think there is great power in making an effort to make invisible belief systems visible because when we make them visible, we may see things about them that we didn’t see before. For instance, in trying to come up with ethical defenses for carnism, it may become clear that the justifications are driven more by taste, evolution, tradition, habit, or culture than by ethics. What other practices have been justified by taste, evolution, tradition, habit or culture and how have these denied or ignored ethical considerations?

I’ll be interested to see what comes of this contest. Admittedly, my expectations are pretty low  for this to spark a more nuanced discussion about carnism, the status quo, and identifying and challenging invisible belief systems since Michael Pollan is one of the judges. (No matter how vehemently he defends his own meat consumption as ‘ethical’, I remain wholly unconvinced.) I expect it will be the same arguments about getting back to ‘humanely raised and slaughtered meat’, about organic, local, free-range, cage-free. etc., about eating less meat, the same dismissiveness about the extremism of vegetarian/vegan lifestyles–all as a way to skirt the more fundamental issue of eating animals in the first place. But here’s to hoping. And, at least, here’s to hoping that reading the ethical defenses of meat eating might spark some people to rethink their own belief systems as embedded in carnism.