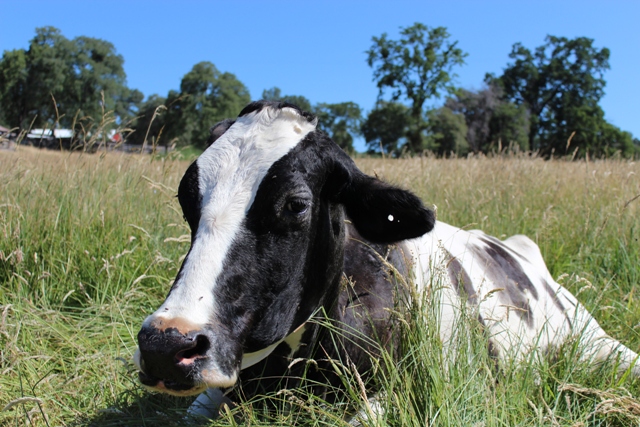 Earlier this week, I heard some very sad news. Sadie, one of the cows I met earlier this summer at Animal Place in California, died. She was fourteen. I wrote briefly about her story in “Sharing Testimony: An Activist Project for Animals” at Our Hen House earlier this summer. When I met Sadie, her story broke my heart and has haunted me since I came home.

For seven years, she was Number 274 and her sole worth based on how much milk could be drained from her udder. When she developed mastitis, an intensely painful infection of the udder, her worth as a dairy cow plummeted. There is no happy oasis for middle-aged dairy cows for there is no profit in permitting a cow freedom. Instead, Number 274 was hauled off to auction where a veterinary school purchased her.

Instead of treating her mastitis, though, the teaching hospital used her as a teaching “tool”. For a semester, students poked and prodded her in the name of education. At the end of the teaching period, the school prepared to send Number 274 off to auction for eventual slaughter. Death would be her fate, until a kind-hearted vet student stepped in. Instead of ignoring the niggling voice of compassion, this young woman embraced her conscience and saved the cow’s life. Thanks to the student’s courage and her persistence, this gentle cow now calls Animal Place home.

It is impossible to gaze into Number 274’s eyes and not see a unique individual. She is not a mere number – she is a bovine unto herself and worthy of more recognition than a yellow ear-tag with a number emblazoned on it. She needed a real name. After much consideration, Number 274 became known as Sadie – a gorgeous cow with a penchant for apples and a strong desire to hang out with our other cows, Howie and Jessie. ~Animal Place

When Sadie arrived at Animal Place, she was pregnant (something the vet school did not notice in the 20 weeks she was there). She ended up giving birth to a dead calf—the only calf she had been allowed to spend any time with after her delivery. She spent time licking and cleaning her new calf before he was buried. Sadie eventually became the adoptive mother to orphaned calves who came to Animal Place. She had a keen maternal instinct and spent a number of years at the sanctuary helping the young ones adjust to their new life. Eventually, Sadie retired to the geriatric herd at Animal Place, which is where she was when I met her. Sadie’s story is, in some ways, written on her body—her limp, her “docked” tail, the holes punched in her ears from ear tags. And in other ways, her story is her own and her history known only through sharing her story. She found a new life at Animal Place, with the amazing humans, like Marji Beach, who care for her.  Marji wrote a beautiful poem honoring Sadie’s life.

Sadie’s death hit me hard this week. I didn’t know her well—I’d just met her momentarily that once. She had seven good years at Animal Place and for that I am so grateful. My sadness is partly because of what she had to endure during her first seven years. But perhaps this sadness is so intense because I know that Sadie is just one individual in a vast population of cows who are bred, used up, and killed just so that humans can have a glass of milk or a piece of cheese. None of these cows will ever know the safety and peace of sanctuary because they are already dead, they are being slaughtered now at this moment, they are being shipped to slaughter today, tomorrow and the next day, and they are laboring as we speak in farms across the country and around the world.

A heavy post for Friday, I know. But I want  to honor Sadie and the 9 million nameless cows in the United States who are identified by numbers on plastic ear tags. May sharing Sadie’s story work to free them from suffering and may we work tirelessly until we achieve liberation for all. In solidarity, now and always.