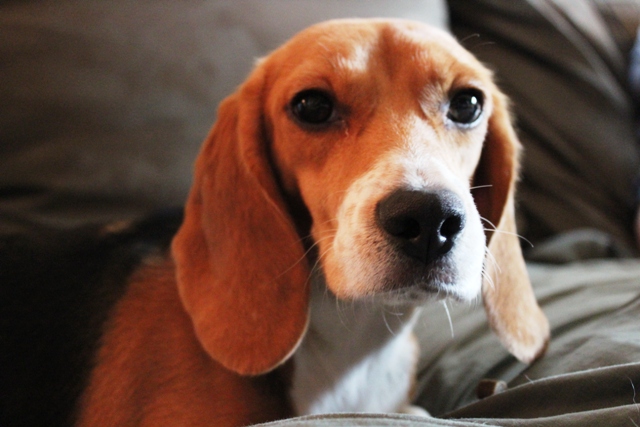 I have to apologize for the inconsistency in posting. Teaching duties and other work have been taking up my mornings when I would normally post and we’ve been in the midst of negotiating the adoption of a new canine family member. I’m delighted to announce that we finally got to bring her home on Friday!

Saoirse (an Irish name, pronounced SEER-SHA) is a 1 1/2 year old beagle who has spent her life until now in a research lab. Beagles are commonly used in lab research because they are small, friendly, and adaptable. Eric and I went to the facility a couple of weeks ago to meet her and she was pretty much petrified of humans. Her tail was tucked between her legs, she shook when we tried to touch her, and her forehead was wrinkled in worry.

She had never been outside. She had never seen the grass or the sky. She has a blue tattoo with an identifying number on the inside of her ear, which makes me want to cry every time I look at it. She is more comfortable behind bars and hides behind baby gates, chair and table legs, or the door to her crate at every chance she gets.

We had to wait until the lab could spay her to bring her home. I visited her by myself a couple of days before her surgery. She was terrified of me and I just let her wander around the visiting room checking things out and didn’t try to touch her at all. By the end of my time there, she came up to me, laid down beside me and wagged her tail twice—huge progress!

My sister, Lucy, has been visiting and she, Eric and I went to pick up Saoirse on Friday to bring her home. Eric worked from home that day so he could be here to help out. When we brought her into the house in her carrier and opened the door, the other animals were here to greet her. Maizy was so sweet and friendly and they greeted each other with tail wagging, sniffing and circling each other. Eden (one of the cats) sat on top of the carrier as we opened the door and tried to play with Saoirse’s tail as she came out of the carrier. She had never seen a cat before, so we were a little worried about that, but she is so timid that the cats are not threatened or frightened by her at all and so it has been a shockingly smooth transition in that regard. 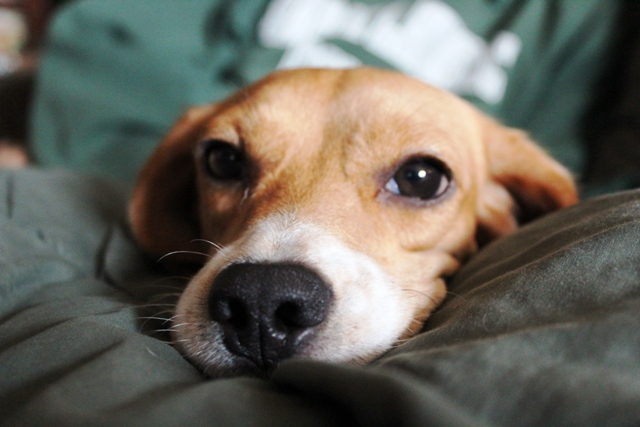 It’s amazing with a dog like this, who is so terrified of the world, that things like her tail wagging once or twice, or her tail being slightly up when we are out walking (instead of tucked between her legs) are cause to rejoice! She is so scared of so many things—like the TV, for example. We turned the TV on and the images flashing across the screen made her shake with fear. We lifted the blanket up in front of her eyes so she couldn’t see the TV and she relaxed immediately. Every noise in the house makes her start and look around. When she’s on the floor in the house, she runs around somewhat frantically, looking for a place to hide. When she finds a place, she cowers there and won’t move. So we’ve been lifting her up onto the couch or the bed with us and letting her snuggle in the covers and watch what’s going on from the safety of the couch/bed. This seems to be hugely comforting for her.

The first time we took her outside on Friday, she had to learn how to walk down the front stairs. That alone took ten or so minutes. She adjusted quickly to being outside and loves going around the block with Maizy. Maizy has been very patient and shows her all the best spots to sniff and Saoirse pees in all the same spots Maizy pees. She wasn’t house trained, so we’ve been working on that over the past few days. She had an accident in the house as soon as we got her home, but other than that, we’ve been taking her outside with Maizy every couple of hours for a walk around the block and she is learning that routine like a pro.

Maizy has been great. Saoirse already clearly loves her and looks up to her like a big sister. We have been trying to give Maizy lots of constant attention so that she doesn’t feel jealous of Saoirse. We’ve been taking Maizy on her own walks everyday, too, so she gets her normal longer walks at a faster pace. She likes to cover a lot of ground and Saoirse is still on the one block in twenty minutes thing. 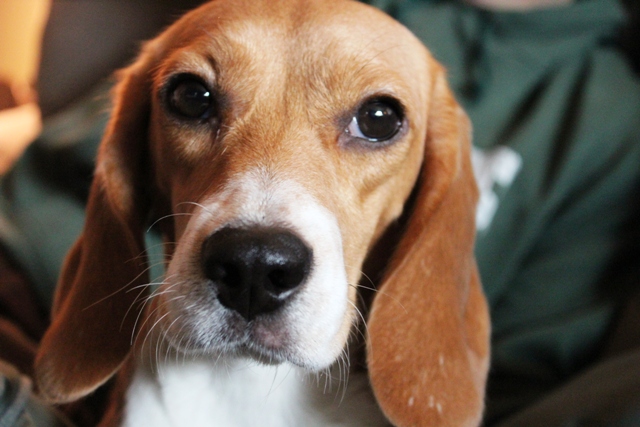 The first night, she spent sleeping in the crate the lab sent home with us. But I woke up early on Saturday morning, took her outside, and then lifted her into the bed instead of putting her back in the crate. She immediately snuggled in between Eric and me and so we’ve been sleeping with her in the bed (with Maizy, too, of course!) since then. Saoirse snores!

She gets a little more comfortable in her new home every day. Tiny, incremental steps…but steps forward nonetheless.

We named her ‘Saoirse’ because it means ‘freedom’. We want to give her a life of freedom. Freedom from pain and human use. Freedom from fear and worry. Freedom to sniff all the smells of the world and explore the outdoors. Freedom to sleep in the bed or the couch or wherever her heart desires. Freedom to wag her tail and run and play. Freedom to love and be loved.

Welcome home, sweet Saoirse! You are already so loved.