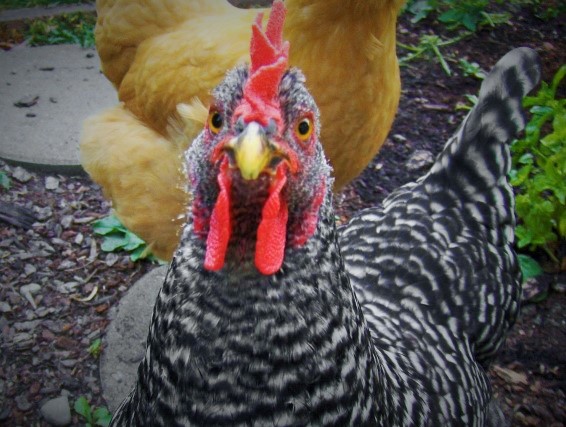 Charlotte died on Friday, and I feel really sad. She was a beautiful and expressive chicken, who was also bossy and opinionated – and a little cranky a lot of the time.

I noticed she was looking a little droopy and not very energetic and, when we checked her out, we discovered that she was in horrible shape. When we looked at her back end, it looked like her insides were coming out of her vent (the opening out of which she lays eggs and poops). I immediately called the vet and they said it sounded like a prolapsed uterus (common in chickens) and we should bring her in immediately. Eric rushed her to the vet and it turned out to not be a prolapsed uterus, but a tear in the abdominal wall. The ‘insides’ that we were seeing were not her uterus, but her intestines and other organs. Tears in the abdominal wall, according to the bird specialist who treated her, are not uncommon in chickens, but they are usually small (smaller than a quarter). This tear was as large as a tennis ball. The vet says this happens for all kinds of unavoidable reasons (the skin tissue can get too dry and tear easily, they can happen from getting pecked aggressively by other birds, and they can just occur from getting injured in normal chicken day-to-day activities exploring the yard).

The vet recommended euthanasia. She said that she could do a series of heroic measure surgeries, but she was not hopeful that Charlotte would recuperate even after those. So we made the decision to have her euthanized. The vet microwaved some fresh corn and Eric fed it to her by hand as her last meal. She hadn’t wanted to eat her favorite treats at home earlier in the day, but she gobbled up all of the corn and Eric was with her when she died.

It was a year or two before we went vegan that we got chickens. We were committed to the locavore/so-called ‘humanely raised’ lifestyle at the time and thought that raising chickens for eggs in our backyard would be a way to embody a greater ethic of care while still eating eggs. We bought chicks for $1.75 each from a country feed store. We named them Emily and Charlotte after the Bronte sisters. They lived in our office under heat lamps until they were old enough to move outside into the coop we had built for them in the backyard. The first few nights after we brought them home, Eric and I set our alarm to go off periodically in the night so that we could check to make sure the heat lamp was the right temperature – we were terrified of accidentally killing them with too much or too little heat.

It was actually raising the chickens in our home like that – and coming to love them – that made us stop eating chickens first and then other animals. Soon after we raised those two chicks, we bought two more chicks to join our backyard flock – Jane (Austen) and George (Elliott). The four of them lived pretty good lives in our backyard, having free reign of the whole fenced-in yard – lots of bushes to hide under, grass and bugs to eat, dry dirt areas where they would take their dust baths, and a safe coop with food and water where they slept, ate, and laid eggs.

A chicken can live up to 15 years, but most hens who are kept as pets and backyard flocks don’t live longer than 5-7 years (much longer, of course, than commercially raised hens, but still only a fraction of their potential life course). Hens, even non-industrial breed hens, have a certain amount of suffering and truncated lifespan written into their genetic code. Chickens have been bred to over-produce eggs and this intensity of egg production leads to serious problems with their reproductive systems, and these complications often lead to death.

A few years ago, Emily started looking droopy and we took her to the vet, only to discover that she had ovarian cancer (common in hens bred for laying eggs). Over several months, she battled the cancer – we gave her regular antibiotic injections to fight infection in her body, the vet drained fluid from her abdominal cavity regularly, and her quality of life was deteriorating fast. In the last days, I worked at my computer with Emily on my lap and petted her soft feathers while she made her sweet soft cooing sound. After several days of that, she grew so weak that we made the decision to euthanize her. I called the vet, told them we were on our way, and, as I was lifting her into the carrier, she died in my hands.

When Emily died, Charlotte was grief stricken. For several months after, she would spend her days wandering the yard, making a moaning sound that we had never heard before. Eventually she settled into life with just Jane and George as her flock, but she had felt the loss of Emily keenly (they were very bonded).

Raising chickens for eggs (even non-industrial breeds) supports a system of exploiting animals for their productive and reproductive outputs. When we bought those chicks at the feed store, we supported a system of breeding animals with a predisposition for suffering. We supported the interstate transport and shipping of live chicks, many of whom die in transit, but are worth so little (in economic terms) that there is a high margin of ‘acceptable losses’ – in fact, some chick-shipping companies state explicitly that you should order twice or three times as many as you actually want, since so many die in transport or soon after. Some companies will use male chicks as insulation, placing them on the outer (cold) edges of the shipping containers in the hopes of keeping the female chicks warm enough to survive transport.

It wasn’t until Emily got sick that it really hit home for me how bizarre it is that chickens lay so many eggs. Average ‘laying hens’ produce about 300 eggs per year – nearly one per day. What other bird or animal produces one egg every day?! The strain on the body and the nutrients leached from the body in egg laying are immense. When I did my research for my dissertation and visited several sanctuaries for formerly farmed animals, I asked each sanctuary what they did with the eggs the chickens laid. The response was that they hardboiled them, crushed them (shells and all), and fed them back to the chickens as a way to replenish the important nutrients they lost in laying them. When I got home from my research, we started this practice with our chickens. Hopefully this helped them be a little healthier.

Eric brought Charlotte’s body home and let the other chickens, Jane and George, say goodbye. Jane pecked at Charlotte’s body and stayed close by while Eric dug the grave. We buried Charlotte next to Emily and marked her grave with a nice rock. I don’t regret that we got to share our lives with Charlotte and Emily (and still share our lives with Jane and George). We learned a lot from them and they set us on the path to becoming vegan. I don’t regret any of that, but I do regret that we bought them in the first place – that we supported and perpetuated a system of animal use and that they suffered at the ends of their lives as a result.