I hope you all are planning to get out and VOTE today! If you haven’t voted yet, read this later and get your behind to the polls! And I hope you’ll think about equality and justice for all while you’re there.

These last few weeks in my “Animals, Ethics, and Food” class, we’ve been talking a lot about ways of making change for animals. Of course, one of the common reactions among students is that the government needs to step in—that passing the right bills and measures will increase protections (and possibly rights) for animals. This always leads to a discussion about the relationship between government and Big Business and the difficulty of moving forward meaningful legislative change for animals when the interests of the meat, dairy and egg industries (in other words, economic interests) are what drive the state.

Thinking about this topic frequently, and with today’s election coming up, I was (at first) delighted when I opened my VegNews Magazine this month to an article entitled “To the Polls!” written by Michael Markarian, president of the Humane Society Legislative Fund. The promise of the article is that Markarian will “tell [us] why the November elections matter more than ever to animal advocates everywhere.” At first I thought, “Great! I don’t usually know where candidates stand on issues of animal welfare and I want to be informed when I vote.”

However, my heart quickly sunk as I read the article. Markarian picked out his Top 5 picks that animal advocates should watch. I was surprised to see that three out of five were Republicans and I know that I tend to disagree with where most Republicans stand on the issues that matter to me (e.g., women’s rights, gay rights, the environment, immigration, gun control, incarceration, etc.). Immediately, I scolded myself for judging these candidates who HSUS is backing before learning more about them. So I hopped online and looked them up. Here’s how they stand on the issues:

Based on this quick research, Betty Sutton might be a good choice for human and animal justice if you’re in Ohio. Fitzpatrick, Grimm and Bartlett, however, support racist, sexist, and homophobic policies. Their stance on the issues reflects a lack of concern for equality and justice for humans. And yet, VegNews, Markarian, and HSUS have no problem promoting these candidates in a completely uncritical manner. We cannot afford to see with tunnel vision only the issues we care most about. Yes, it would be an amazing stride to ban the trade of primates as exotic pets as Fitzpatrick supports. Yes, it would be significant progress to ban the use of chimpanzees in research and ban the use of live monkeys in chemical warfare training by the US Army as Bartlett is advocating. These are vitally important and much-needed steps forward. But at what expense and for how long?

I’ve been thinking a lot about the intersections of oppression and the underlying structures that cause racism, sexism, speciesism, etc. Until we explore the intersections among these and the fundamental structures of power, violence and hate woven through the fabric of discrimination, I don’t see how we can make lasting change for any group. Take the women’s rights movement, for instance. The 1970s was a time of great change for women—amazing strides were made in rights for women, changes in public consciousness, and policies that improved women’s experience of the workplace and the world. Admittedly, we still have a long way to go. Currently, women’s rights are back on the table in a way that harkens back to decades prior, with the attacks against women’s right to choose, against women’s health and rights more generally. 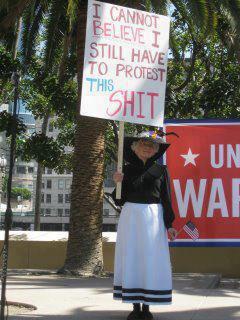 I suspect this will continue to be the case until we recognize the intersections among all oppressed groups. We are trying to change the symptoms of the problem. But the problematic structure of inequality remains the same.

Hopefully we will all get out to vote today and vote with our conscience and what feels right in the most holistic way for each of us. But later today and tomorrow and the next day, why not think about this process and the project of destabilizing these underlying systems of oppression. Going forward, let’s think about the kinds of candidates who were on this ballot and the kinds of candidates we want to see on future ballots. Let’s think about the political process more generally and its ability to make change (or not). Let’s think about ourselves and each other and try to be better versions of ourselves—more kind and compassionate, more inclusive and tolerant, and more radical in our demands for justice.